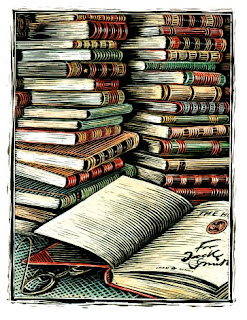 Here is a great video on:

1. One man's journey to re-create the Pictorial Webster
2. How books used to be made

By the end of the video I wanted to stand up and applaud.


Pictorial Webster's: Inspiration to Completion from John Carrera on Vimeo.

Here are some other videos on book making

Playlist of 22 videos on book making on youtube and some tips on how to make books here .


Really inspirational, I intend to make a book of my own in 2010, suggestions are welcome :)
Posted by Unknown at 12:53 PM No comments:

Email ThisBlogThis!Share to TwitterShare to FacebookShare to Pinterest
Labels: books

In some senses Inglourious Basterds is a typical Quentin Tarantino movie with "Chapter" - based narrative, cinematic nods of acknowledgement to past movies from the same genre and comic relief blended into seemingly ultra-violent settings: (Col Hans Landa's sherlock-holmes-on-hormones calabash pipe compared to the Frenchman monsieur La Padite's rustic little briar-aspirant pipe did break the tension for the entire audience in my hall during the opening scene of Jew search visit). Everything from the title itself to the minor details is inspired but Inglourious Basterdsis definitely worth a watch.

What I liked about Inglourious Basterds is that it gives enough screen time to all the major characters. Though Brad Pitt features most prominently on the posters, to me his character appeared as just one of the many key characters in the movie. Lt. Aldo Raine, the Jew-Red-Indian heritage leader of the Basterds played by Brad Pitt, provides a lot of comic relief and sense of purpose. His southern Tennessee drawl, never ending search for Nazi scalps and matter-of-fact engraving of the Swastika on the foreheads of captured Nazis all help make him the most loved of all the characters with the audience.


However my personal favourites in Inglourious Basterds are Lt. Archie Hicox, the British German movie industry doctorate holder, played by Michael Fassbender, Bridget Von Hammersmark, the German movie diva played by Diane Kruger and Col Hans Landa, the "Jew Hunter" SS colonel, played by Christoph Waltz. I also liked the acting of the Frenchman Denis Menochet as the French dairy farmer Monsieur La Padite, hiding his Jewish neighbours in his cellar. In fact all the actors in Inglourious Basterds have done really well.

The English subtitles of the many German and French dialogues have been handled extremely well. There are many fast paced dialogues in German which have been executed superbly. Of course most of the cast involved in these is German anyway but it still needs an intelligent director to convert it into great reel time and Quentin Tarantino is more than up to the task here. My two favourite scenes from Inglourious Basterds are: the first opening scene where Col Hans Landa visits Monsieur La Padite and his three very beautiful daughters and the tavern scene involving the three basterds, Bridget Von Hammersmark and the SS Major Hellstrom. In both the scenes a lot about the characters is revealed, the tension slowly builds up, wooden tables are involved (ok that was stupid) and the outcome in each has great impact soon after. Both the scenes have German, French and English. The subtitles have been done well and more importantly the transition from German English and French English and back and forth is amazingly smooth.

As a film, Inglourious Basterds is acutely aware of its audience being far removed in terms of time from the events of World War 2. Take for instance when the narrator explains the highly combustible nature of the 35mm films of the era of World War 2 and he starts with the words "In those days...". Even the need for the narrator to provide an explanation on this says a lot.Another example of this self-awareness is the pointing out on screen the key Nazi officials using animated arrows. These are not necessarily bad things to do, in fact these help to cut through the chase so to speak and highlight the significance of events immediately. Quentin Tarantino certainly knows how to endear his movies to his audiences. In some sense I would do the same if I was to make such a movie for today's audience...okay now entering the realm of day dreaming.

Films on World War 2 will not go out of style any time soon, they started soon after the outbreak of the Nazi Blitzkrieg in 1939 and haven't run out of steam yet. Apart from Inglourious Basterds, there are at least two Hollywood films on this theme set to be released within the next year (a remake of the 1955 Dambusters and the other being Little Iron Men). Inglourious Basterds will never be in the top rung of great World War 2 films and perhaps if a poll of such great films was to be held a decade from now, Inglourious Basterdsmay not make it into the top 20 but the current popularity of this movie can not be denied.

Where this movie really scores is that it seems to appeal a lot to a newer generation of movie-goers who have never heard of Patton or Tora Tora or The Longest Day or Dirty Dozen or The Eagle Has Landed et al and who couldn't care less about last year's bomb Valkyrie but who can easily sit through a Quentin Tarantino style rendition of almost anything be it a movie on World War 2 or on how a bride extracts sword-blade revenge or on the nuances of selling salted butter in Namibia or whatever. And in this sense Inglourious Basterdsnot only keeps the tradition of World War 2 movies alive but it will perhaps help re-introduce at least some of the above mentioned movies to a newer generation of film buffs.

Post Script: - The black and white Nazi propoganda movie of Joseph Goebbels called the "Nation's Pride", which plays in Shosanna's cinema, was directed by Eli Roth, the character who plays the baseball bat wielding Bear Jew.


Another anachronism I noticed was when Col Hans Landa talks of precluding any chances of being tried by a Jewish court. In 1944 there was no Jewish state and the real possibility of such a state was quite remote. Further the question of a German colonel ending up in a Jewish court would also seems quite remote or non-existent at the time. Hence Landa's comment is anachronistic. However after the formation of Israel some Nazis were tried in "Jewish" courts the most famous such case being the trial of SS Lt.Col. Adolf Eichmann in the 1960s.