Most people know of William Jones' superhyperparanormal command of scores of languages, precocious childhood and ever more prodigious adulthood. Most also know that he was the founding father of the famous Asiatic Society of Bengal. However, few are aware that William Jones also went around by the nom de plume Yunis Uksfardi. 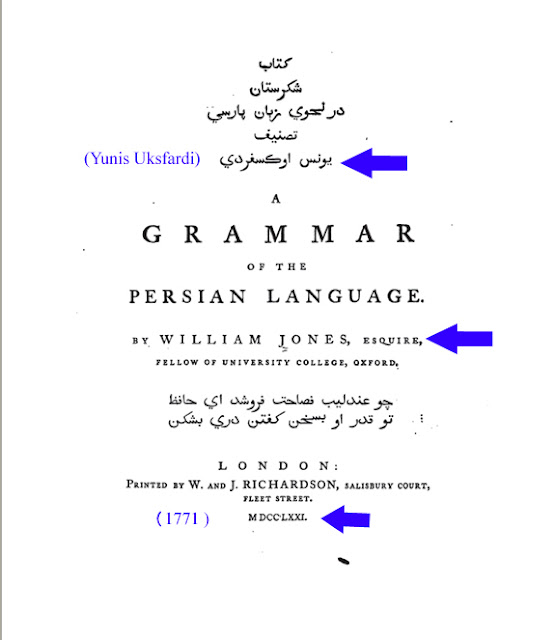 Uksfardi obviously comes from Oxford and refers, perhaps, to the deep sense of attachment that William Jones may have had for the University of Oxford. He seemed to treasure his association with the University of Oxford so much that he selected Oxford rather than his place of birth, Westminster, as his last name in Persian. Perhaps he took up Uksfardi as the second part of his pen name because it was at Oxford that he learnt Arabic and then Persian under the tutelage of a Syrian native, Mirza of Aleppo, whom William Jones chanced upon in London and requested him to help him learn these tongues. William Jones was very highly regarded at Oxford and won quite a few accolades during his time there. In 1780 he even contested in the Parliament for the seat from Oxford.

He swept aside both options in favour of Yunis. There has to be a reason for this choice.

But why Yunis, why?

One gets an idea of William Jones' inclination towards the re-discovery of Ancient Oriental knowledge from the (celebrated) Preface to his Grammar of the Persian Language. The Preface is truly an introduction to the Persian language as it goes into the details of describing the Persian language as well as of the development of the language. He extols the virtues of Oriental knowledge and also denies any validity of the various excuses the British of his time used to make for not showing an interest in Persian culture; ranging from being too busy to waste time on Persian to Persian being a language of barbarians and or of believers in Mahomet,  to everything else in between. Bear in mind that in 1771, warfare between the fractious European powers and the Ottoman Empire was still very common indeed and also that European imperialism was now taking firm shape. William Jones cites Voltaire's unbridled appreciation of Persian literature in support of his ideas. He goes on to explain how Persian has started becoming very important for the British in India for good governance and politics as all court correspondence, firmans and petitions are in Persian and every British official in the Indian courts must be able to hold his own when it comes to reading and writing in proper Persian without resorting to Munshis. This book on Persian Grammar is clearly targeted at the British officials in India. I think I remember reading somewhere that William Jones wrote this book at the request of a director of the East India Company who wanted a Persian manual for the EIC officers. Earlier they had to rely solely on the Indian Munshis for learning Persian and other Indian languages. However, soon after, the British realised the importance of employing local dialects rather than Persian or Sanskrit while conversing with the commoners. To this end, Fort William College was established in Calcutta at the turn of the 19th century. The British of course, sounded the death knell for Persian in India when they outlawed its use as an official language of British India around half a century after the publication of the first edition of William Jones' Persian Grammar.

In his Preface, William Jones laments the fact that he does not have enough time to write an accompanying history of Persian literature. William Jones, of course had earlier already translated many books on Persian history from Persian into European languages. Perhaps in the title pages of these texts also he may have given his name as Yunis Uksfardi. He gives pointers to Europeans on which intermediate and advanced texts to study in order to extend their basic learning ("the first book I would recommend is... Gulistan, the Bed of Roses..."). William Jones informs the reader that if the learner follows his advice then he will be able to correspond with any prince in India and with any commoner within a year of starting his studies. He also suggests that mastery of the various aspects of Arabic (Arabick) will be completely essential for attaining truly dizzying heights in the knowledge of Persian.

Although William Jones' Persian Grammar is good as a book for learning Persian but it's not the best.. Perhaps it was the best book of its kind in English when it came out but then it was soon eclipsed by other Persian manual. Lt. Col D C Phillott's magnificent book comes to mind immediately as a later day example of a much more exhaustive text, but there is no doubt that William Jones's book was the path finder for learning Persian through English. William Jones' Persian Grammar proved so useful and famous that it has to date never really gone out of publication (latest edition 2010). For me, the true value of the book lies not so much in the main didactic section but rather in the Preface, which William Jones uses very well to converse with his reader and to put forth his case for the study of Oriental subjects.

I end by quoting the last paragraph from Yunis Uksfardi's Preface to his Persian Grammar:

" As to the literature of Asia, it will not, perhaps, be essentially useful to the greater part of mankind, who have neither leisure nor inclination to cultivate so extensive a branch of learning; but the civil and natural history of such mighty empires as India, Persia, Arabia and Tartary, cannot fail of delighting those who love to view the great picture of the universe, or to learn by what degrees the most obscure states have risen to glory, and the most flourishing kingdoms sunk to decay; the philosopher will consider those works as highly valuable  by which he may trace the human mind in all its appearances, from the rudest to the most cultivated state. and the man of taste will undoubted be pleased to unlock the stores of native genius, and to gather the flowers of unrestrained and luxuriant fancy"

I still can't get over Yunis Uksfardi being the nom de plume of William Jones. I think it would have been fantastic to meet him.

The collected works on Sir William Jones at Archive.org

A Grammar of the Persian Language (1771 edition)

A Grammar of the Persian Language (1828 edition) - this one has some useful footnotes to the Preface and the font is more legible.


Asiatic Society of Bengal
The official website - They have done a decent job of ensuring that some of the old manuscripts of India and scholarly papers remain in circulation.
Their history in their words

Learn Persian
Lt Col D. C. Phillott's fantastic book of Persian - Higher Persian Grammar (1917). Make sure you read the Introduction.
And while you're at it, also consider reading his true treasure, a book on Hindustaani Idioms,  Khazana - i Muhaawaraat (Treasure of Idioms) - highly highly recommended.

Or just check any of the 50 trillions websites which help you to learn Persian.