Climate change is such a hotly debated topic that almost everyone has an opinion on it and even to not have an opinion ("I just don't know") is a valid opinion as many believe that we still do not have enough data to swing the decision in either side's favour.

The phenomenally controversial head of the Goddard Institute of Space Studies of NASA and noted Anthropogenic Global Warming proponent, Dr James Hansen has published a paper called Perception of Climate Change, in a scientific journal called Proceedings of the National Academy of Sciences, in which he gives statistical data for temperature changes over the last six decades in the Northern Hemisphere of the Earth. Using this data, Dr Hansen concludes that the Earth has been getting much warmer and that the evidence is incontrovertible. Further he also claims that extreme weather situations have become much more common than earlier. The Economist has carried a story on this study and this is where I first read about the study. 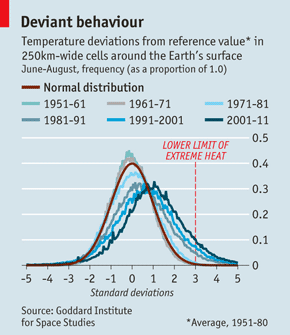 The data graph of the study given in The Economist


Description of the Graph :


Conclusions from the Graph:

Positive Attributes of the Study:

Doubts over the Study

Statistics have to earn our trust. We can't give it away for free to them. They have to be able to withstand our scrutiny. And this applies more so to statistics we want should be true, the ones which prove something we hold dear. Or else, suddenly, we might find ourselves betrayed by our own hasty acceptance of data we want to believe in.
Data Doubts

Although, in this scientific paper Dr Hansen has not made any claims about the causes of this clear rise in global temperatures, he is a vociferous advocate of Anthropogenic Global Warming (read human induced global warming) and will place this data analysis in that context.

I think the single most important caveat for anyone looking at statistics, be they of weekly milk prices for one's household budget or climate change figures, is to not confuse correlation with causation. Sympathetic movement of two things does not imply a dependency relationship between those two things. Recently Krishnamurthy V Subramanian of the Indian School of Business has written a very lucid and meaningful article on the difference between correlation and causation. It can be accessed here.

I believe that climate change is being brought about human actions.I don't know this but I believe it. I am constantly trying to find ways to reduce my carbon footprint. However I do not wish to be slotted into either of the two opposing camps.

However instead of going into why I believe this I would like to dwell on some questions come to my mind based only on rationale. The answers to these questions will need more data and analysis but once answered they will perhaps help convert my belief into my knowledge and certainly aid policy makers and businesses to come to terms with the reality of our economic activities (again provided these questions are answered).

These questions directly address the correlation and causation problem for this study on climate change. Answering these could help convert any correlation between greenhouse emissions and climate change into a casual relationship and further even establish the direction of the relationship.

The data above clearly points to increasing weather temperatures in the Northern Hemisphere since the 1950s. Further heat extremities are also rising, fast. But I do need to clear my reservations, as given above in the Data Doubts section, before I can whole heatedly embrace the analysis. Perhaps within the next few years even more conclusive and exhaustive statistical studies on climate change will be carried. I eagerly await that time.

The Economist's story on the study published by Dr Hansen


Meanwhile, here in Delhi.......it's getting hotter and drier and more erratic........please ignore, as this is anecdotal evidence and does not make for good statistics ;)
Posted by Unknown at 5:59 PM 7 comments: