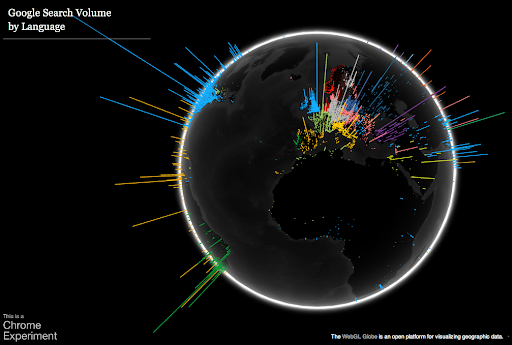 Google Search Globe  provides daily statistics on which parts of the globe search in which language and in how much volume. I choose to see Search Globe as a great interactive 3D globe which gives insights into which languages are dominant in which parts of the world for online searches.  Quite fun moving the World around. Needs WebGL in your browser.

Some observations on Google Search Globe:

I really like WebGL, it is a beautiful way to interact with 3D content through one's browser, without the need to install any softwares other than a decent browser. One can explore the human anatomy, the World' geography, play 3D games, interpret 3D data and what not. Some more wonderful WebGL applications by Google are available here
Posted by Unknown at 12:07 PM 1 comment: