An architect in Hong Kong has invented a system of house-space management called 'Domestic Transformer'. This system essentially allows for very efficient utilization of a very small space with the help of a series of hollow partition walls which slide in an out of each other over channels on the floor and on the roof to reveal, conceal, expand, reduce and "create" space. Bed rooms change in to sofas, libraries into kitchens, CD racks make way for bath tubs so on and so forth. Hence the term 'Transformer'.

Here is a video of the Hong Kong architect Gary Chang demonstrating the use of his concept 'Domestic Transformer'.

To be sure the Domestic Transformer house is not a dream house for most people and it could loose the "cool" appeal for many people after their having lived in it for some time. However it is a great idea for those who have to manage in very small and tight space due to reasons of affordability, legal restrictions, space scarcity, just lesser need for living space or any other reasons. Many people just don’t have a choice; they have to spend a majority part of their lives in tight-choc-a-block houses.

Although architect Gary Chang was inspired to come up with this space management concept as a result of his entire family (of 5 or more people) having to live in a crammed Hong Kong apartment, Domestic Transformer type houses could become a hit with bachelors and those who live alone as well. In the over-burgeoning, always-hard pressed for living space, metros such as Mumbai, Singapore, Tokyo, Sao Paulo, New York City , Mexico City, Hong Kong space management is top priority. It is for such urban areas that Domestic Transformer type of houses are a boon. Of course the economic viability and pricing of such projects would have to be looked into and in order to be successful the model would have to be customized according to the different environmental and cultural conditions and preferences for each metro. But the concept is inherently good and useful.

A cursory search for houses for sale in Hong Kong (keeping in mind the surface area and location) does seem to indicate that the Domestic Transformer house is not overly priced, but this is not an accurate or final judgement. 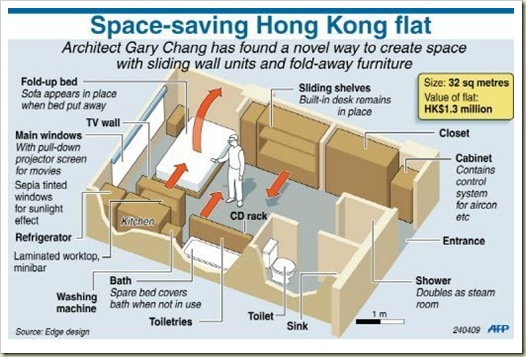 I personally prefer a reduction in the population density in the metros as I am sure do many others, but this reduction is not going to happen within the next three or four decades. On the contrary the growth in urban population is increasing faster than ever.

Some of the reasons for the ever-increasing importance of better urban space management are:

Ideas such as Domestic Transformer are much needed and even though they may not be perfect but they are a step in the right direction.

If you have some ideas and know of some similar concepts do mention them in the comments field below. I would love to explore this further.

National Geographic’s website on populations. Make sure you check the “population trends” topics on the right hand side of the map on the opening page.